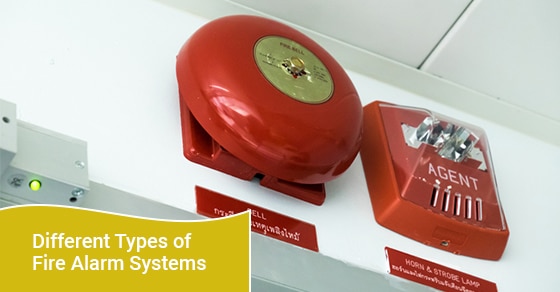 The purpose of the fire alarm system is to notify us of an emergency so that we can take action to safeguard ourselves, our employees, and the general public. The types of “fire alarm inspection” will be discussed in this article.

There are four main types of Fire Alarm systems.

Physical cabling is utilized in a traditional fire alarm system to connect various call points and detectors, with the signals being routed back to the main control unit. When a detector is prompted, the control panel recognizes the circuit that includes the triggered device and hence the zone from which the fire alarm emanated, but the area must then be manually examined to pin down the source of the fire alarm, However, the region must then be carefully explored to locate the individual device.

For many years, traditional, or four-wire, fire alarm systems have been widely employed in smaller establishments like stores and restaurants.

Intelligent Systems, on the whole, are significantly more complicated and include far more features than Conventional or Addressable Systems. Their main goal is to reduce the number of false alarms that arise. Intelligent Fire Alarm Systems come in 2, 4, and 8 loop configurations, allowing big buildings to be tracked from a single panel.

The detection mechanism of an Addressable System is similar to that of a Conventional System, except that each detector is assigned a unique address (typically via a dip-switch), allowing the Control Panel to pinpoint which sensor or call point has triggered the alert. The sensing circuit is wired as a loop, and each loop can have up to 99 devices linked to it.

The Wireless Fire Alarm System is the last type of system we’ll look at. For all applications, these are a viable alternative to standard wired fire alarm systems. To connect the sensors and gadgets to the controllers, they use secure, license-free radio communications. It’s a basic concept with a lot of benefits, and it’s a comprehensive intelligent fire detection system that doesn’t require any wiring.

The detecting devices, which range from complex intelligent smoke detectors to simple manually controlled break glass units, are at the heart of a fire alarm system. There are many different varieties, however, we may split them into groups such as:

The flow of current diminishes when ignition occurs in the chamber. An alarm is triggered by a decrease in current flow.

The light from the projector is scattered and falls on the photodiode as a result of the smoke entering the chambers. An alert is triggered using the photocell output.

With the light source and photocell spaced apart, this sort of fire detection system can be utilized to safeguard broad regions.

Multi-sensor sensors combine optical and thermal sensor inputs and analyze them using a complex algorithm incorporated into the detector electronics.

Call Points that are manually operated:

A Manual Call Point, also known as a Break Glass Call Point, is a device that allows staff to activate the alarm by breaking the high explosive element on the front.

We learned in this article that fire alarm systems are installed in many of the buildings we see daily and that they are used to warn individuals inside the building of an urgent fire situation.